TrutnOFF is adding Skunk Anansie, The Dreadnoughts and “the present time Tom Waits” Ben Caplan. One of the domestic headliners is Stromboli.

With the Children's Day we traditionally drum out more bands coming both from overseas and domestic territories. The fresh electro swing Parov Stelar, the industrial metal Fear Factory and the popular singer-songwriter Jake Bugg will be completed with alternative rock of the legendary Skunk Anansie with the vigorously agile singer Skin. Besides the British Skunk Anansie, the program will also include a few performers from Canada, i.e. a folk- punk band The Dreadnoughts and a well-bearded Ben Caplan, evoking Tom Waits in his early days. He could actually become one of the unexpected surprises and peaks of the alternative festival rank. We recommend listening to him. The domestic headliners will include Stromboli, among others. TrutnOFF Open Air will take place on “the battlefield” in the usual "occupation" term of August 18th to 21st and it will be dedicated to the would-be 80th birthday of Chief Václav Havel. 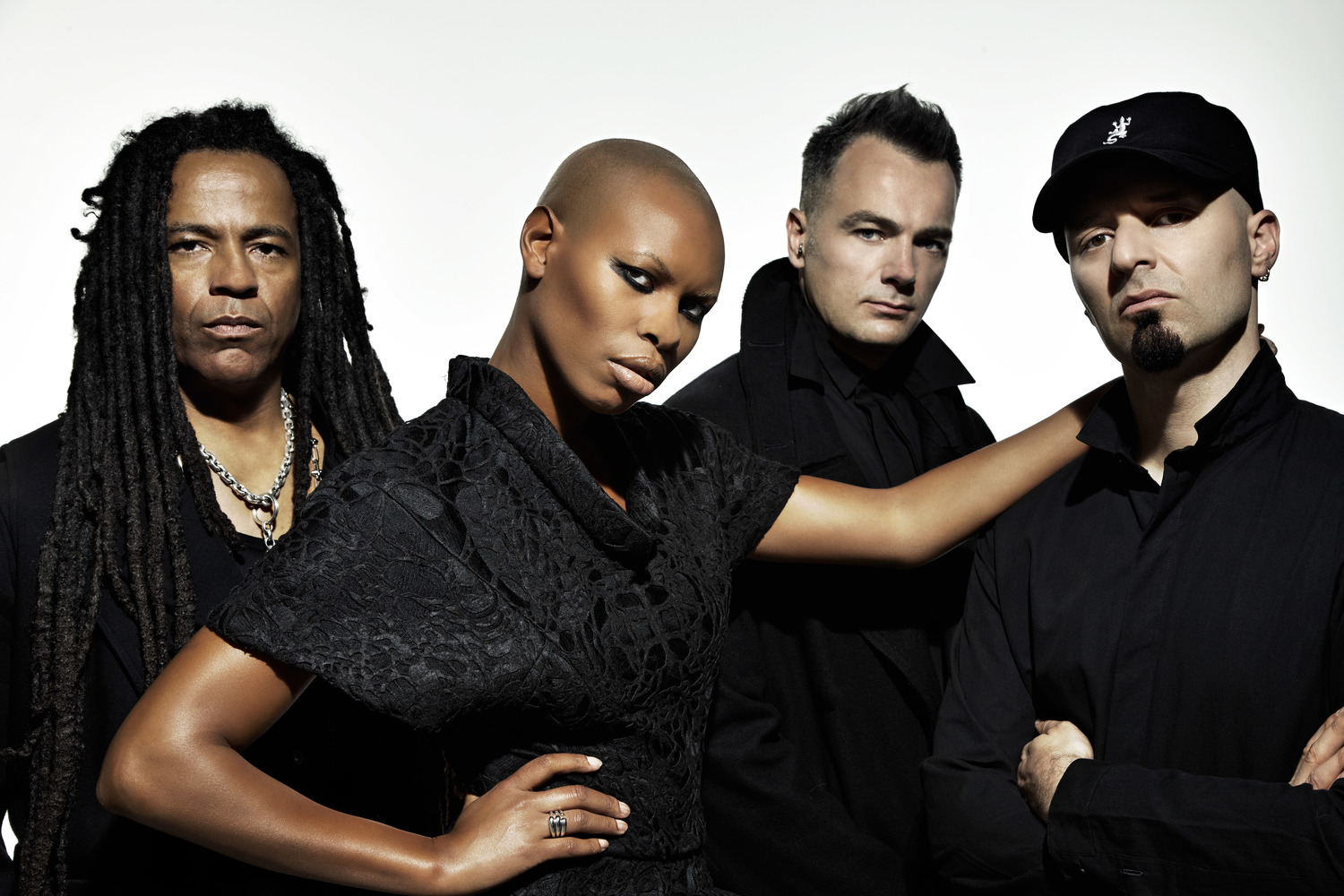 Skunk Anansie, the English rockers led by their charismatic singer Skin, who still, even after twenty years of touring the world and millions of records sold, feels as “outcasts, outlaws and outsiders,” as says Skin, the Brixton bred front woman. But they do not give a damn. "The things that distinguish you from others in the beginning become what people love about you in the end." Skin knows what she's talking about - at the beginning there was a question of where they should be placed and thanks to its black singer they often appeared on the shelves in the Rhythm&Blues section.

The London based Rock quartet, besides Skin consisting of the drummer Mark Richardson, the base player Cass and the guitar player Ace, was formed in 1994 - and it soon became a trend setter of the modern rock crossover. Because they were too heavy for the British “Cockney” scene, and much too original to simply imitate the sound of the American grunge, Skunk Anansie bore their own path through the tornado of the jagged noise. And they waded through the community of the drunken culture and avoided mutual squabbling of popular bands. “We came together with the Brit rock, but we have never been considered part of the scene,” says Skin. “Our peers and fellows were Americans - Rage Against the Machine, Nirvana or Pearl Jam. We certainly never listened to Blur, “she adds. 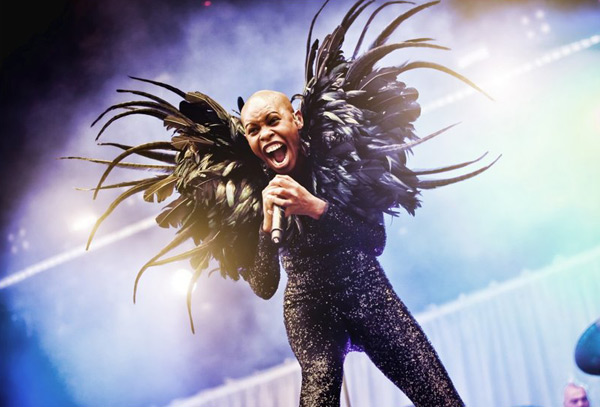 They soon record two genre-defining records of that time “Paranoid & Sunburnt” and “Stoosh”. Skin became an icon, a fashion idol and muse for both men and women. She sang a duet with Pavarotti for the audience including the Dalai Lama and she performed with the band also at the celebration of the eightieth birthday of Nelson Mandela.

Hectic style is taking its toll. In 2001, Skunk Anansie are taking a break. What was originally intended to be only a short rest stretched into vacation lasting nine years, during which all four members put their energy into various solo projects (in the case of Skin the resulting in two solo albums, modelling and DJ performances).

In 2009 they come together again. Within a year, a new album enters the world. “Wonderlustre was about us that we are all together again, that we are getting it back together. Then folloing Black Traffic of 2012 was the result of their previous tour, all social and political views of the world and influences that we picked up on the way. Anarchytecture (the sixth studio album, released in 2016) is a blend of both of those energies,” says the band.

The Skunk Anansie come to Bojiště in their full force. One of the major festivals - the Budapest Sziget, also announced them as  one of the biggest stars of this year, and they will perform there only a few days before arriving to play to our foothill tribe and Krakonoš in his mountains.

Two bands from the land of our Red Indian ancestors. The festival surprise – Ben Caplan? 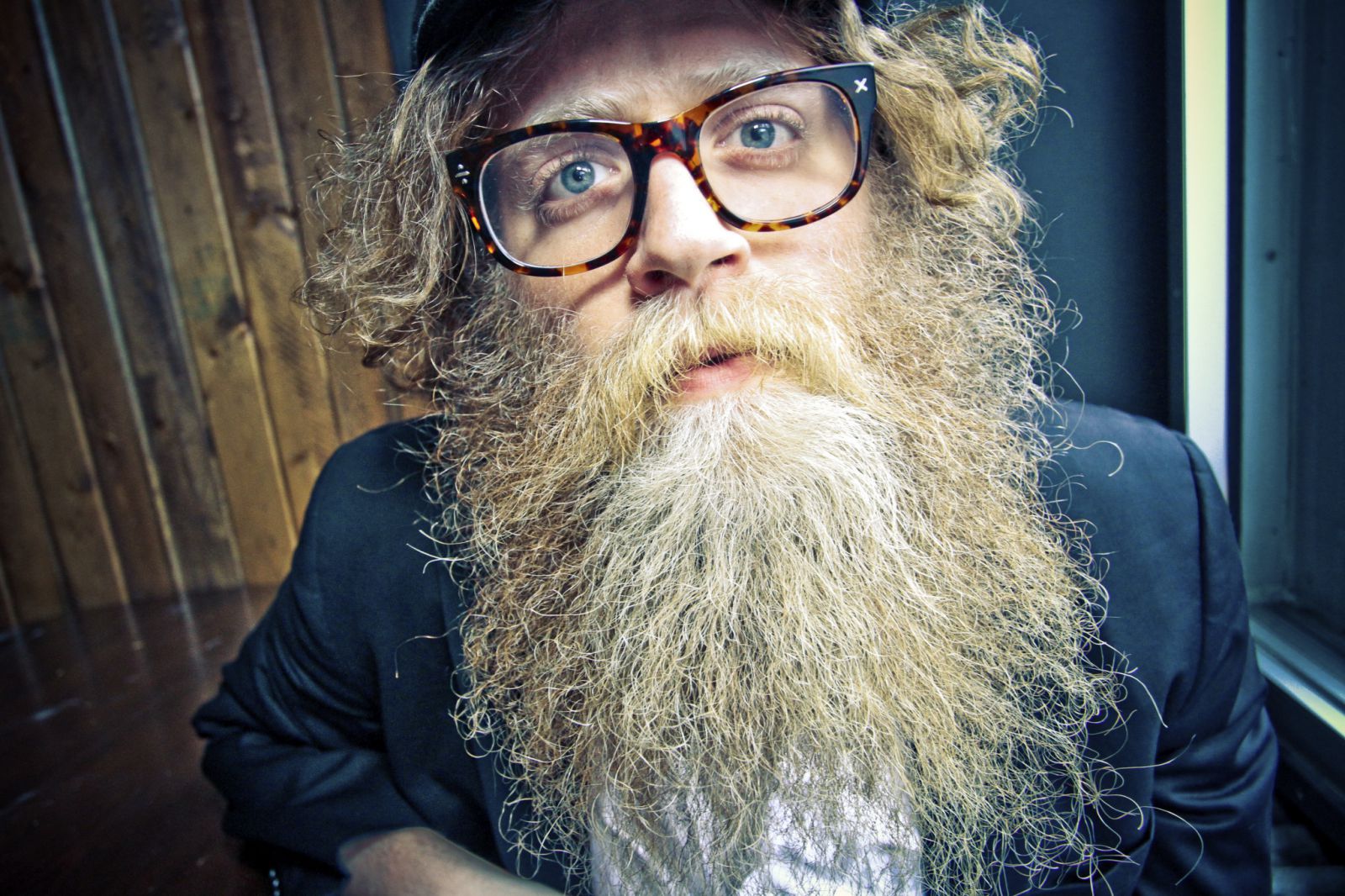 This year there are two names from Canada, which is unusual in our program. Surprises could be caused by Ben Caplan and his band The Casual Smokers. When we first heard him, it was clear that he belongs to us, to our tribe. His recordings from the street, the field or just from a forgotten bar somewhere among Canadian plains and mountains are stunning for its immediacy and genuine nature. “Most of us were won over by a recording from a sunken pub where Ben is playing only for a few regulars as though he just came by an incident. The mood and his speech reminded us of Tom Waits in his early days. He also just sits in the corner at the piano, and in his deep voice he is sort of singing to himself and banging the keys. From a distance a couple of regulars are watching him from the bar while telephoning and talking only to realise  when Ben finishes that  they had witnessed something extraordinary and exclaim,” Excellent!” . We recommend for listening!

The Canadian singer with a beard that cannot be seen just every day might capture you just like he did with us - with his deep voice and his whole charisma. The charming breaker of hearts and pianos, a honest poet, a strummer of delicate chords and discordant melody lover has toured Australia, Europe and North America. As soon as Ben has your attention, he can hum finer than a glass of malt whiskey. In music, among others, he is also inspired by Eastern Europe and Jewish folk tradition. Ben Caplan is unforgettable - a huge beard and untamed mane, deep captivating voice and the correct dose of the so needed folly. 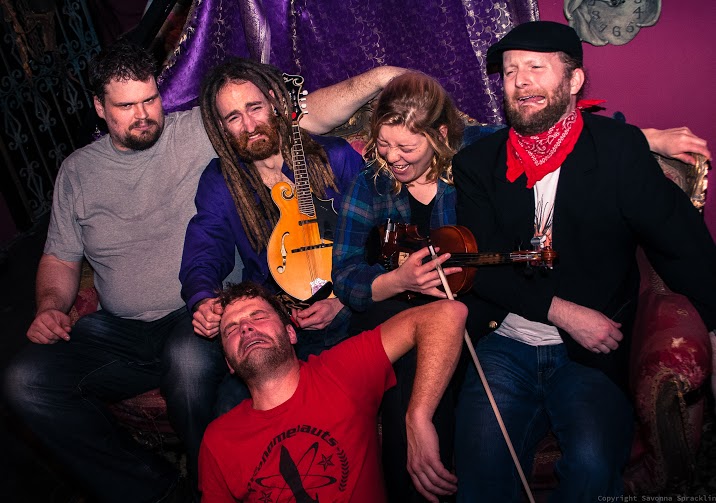 The Dreadnoughtsgot together in Vancouver in 2006 and from the beginning they are trying to convince everybody of their belief that the combination of punk and folk music can result in the perfect marriage. They drink and play in bars and clubs like crazy until their supporters get drunk, exhausted and sweated to redemption. Often they have been and still are recognized as one of the most energetic live bands. For all who do not want to miss them out at Bojiště (hopefully you will not make such mistake) it is worth stressing one fundamental thing. This country- punk pack dreams of retiring in Hawaii and playing polka there until they die. But in order to earn enough to realise the plan, they decided to play a few gigs in Europe after a pause. Remember - all the money you spend on their records, T-shirts and badges will help them buy a big house on Maui, a lifetime supply of Caribbean rum and three new accordions. And all of that will be damn necessary in their retirement!

Stromboli and other domestic bands

Tickets can be ordered at www.festivaltrutnoff.cz/vstupenky. Current price is 1,400 skins, order 10 tickets and get 1 free. Newly you can purchase tickets in a form of an e-ticket, which just makes it all easier. Camping and parking in our foothill camp is free!

“So, hopefully we will enjoy the sun and all other gifts offered by this friendly meeting under the mountains.“ See You Later...!